The Cracow Functional Area is characterized by a high socio-economic potential. Get some basic information about location, demography, laobut market and key economic sectors of this area. 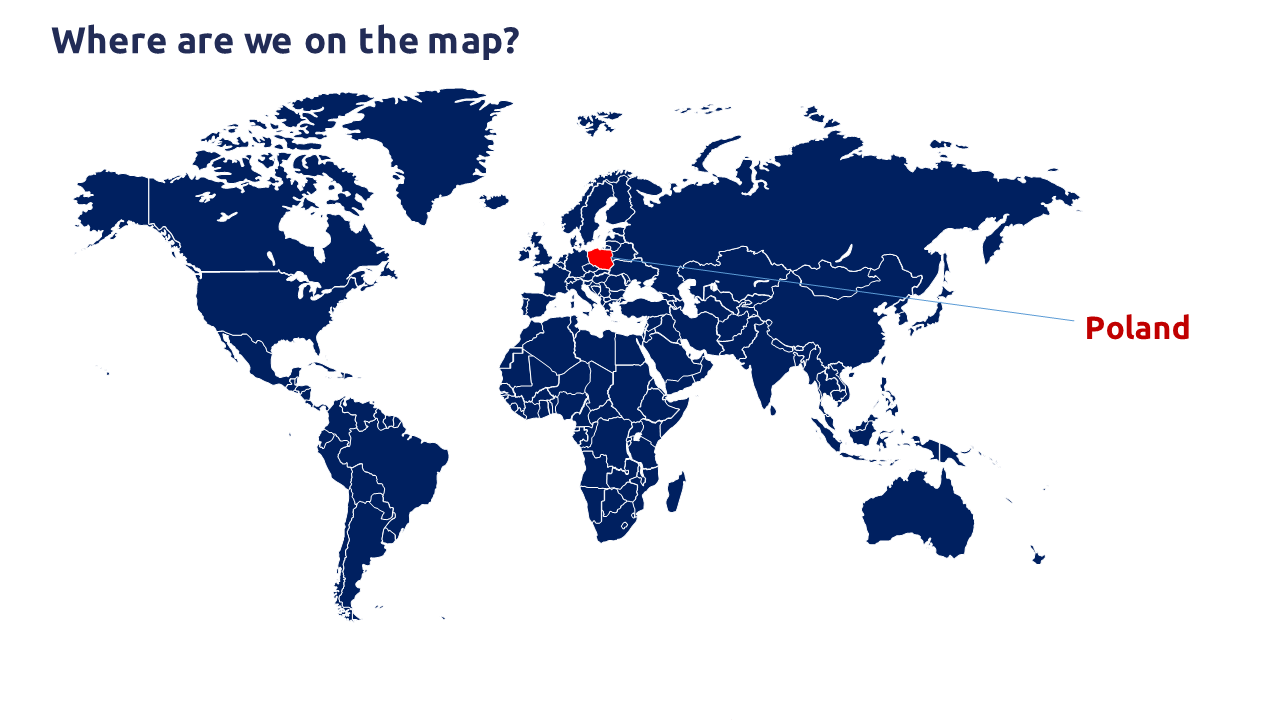 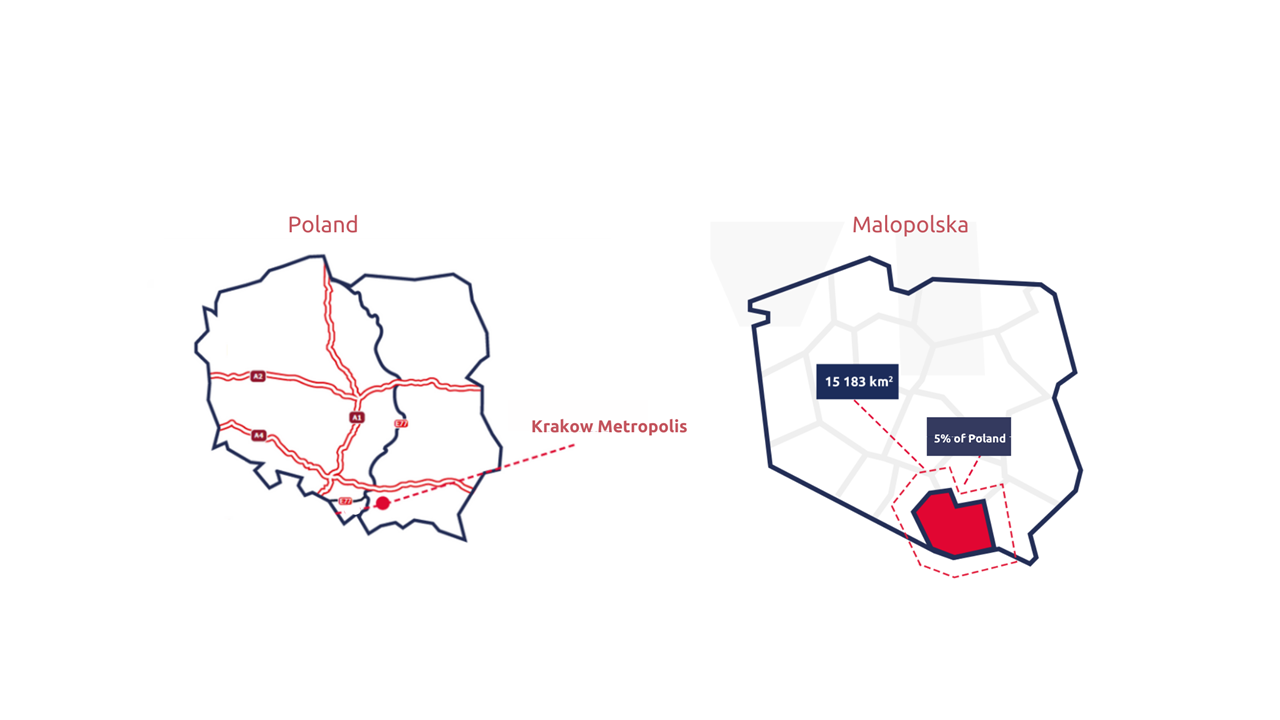 Location and structure of the area: 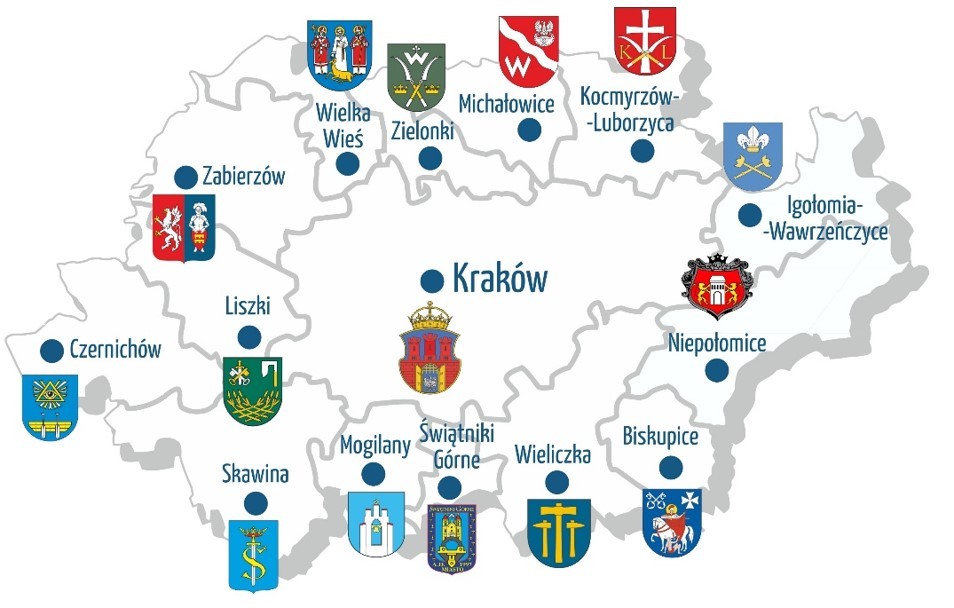 Cracow Metropolis creates a comprehensive platform for cooperation of the municipalities associated within it, located in the Cracow and Wieliczka districts, as well as the city with district rights - Cracow. Cooperation between local government units makes it possible to achieve a synergy effect in implementing a supra-local approach to solving common issues and maximising the potential of all units. Cracow Functional Area was delimited in connection with the implementation of the Integrated Territorial Investments (ITI) instrument in the Małopolskie Voivodeship, which is a new territorial development instrument implemented under the European Union's cohesion policy in the 2014-2020 perspective. Cracow Functional Area was identified in the draft Regional Operational Programme of the Małopolska Voivodeship as the delimitation of interventions in the form of Integrated Territorial Investments within an integrated territorial approach - it covers an area of 15 gminas with intensive functional connections: Cracow Urban municipalities and the surrounding 14 municipalities: Biskupice, Czernichów, Igołomia-Wawrzeńczyce, Kocmyrzów-Luborzyca, Liszki, Michałowice, Mogilany, Niepołomice, Skawina, Świątniki Górne, Wieliczka, Wielka Wieś́, Zabierzów, Zielonki.The integrated territorial approach, which constitutes the basis for the functioning of the area, aims to eliminate barriers to the development of the Cracow Functional Area and to exploit the specific territorial potential of individual municipalities. Key areas of activity of municipalities in the implementation of ITI include: development of economic development infrastructure, development of road infrastructure, implementation of projects aimed at improving energy efficiency, conducting activities to reduce air pollution (with emphasis on reducing low-emissions), conducting investments of sustainable transport, improving water and sewage management, improving waste management, and developing health care infrastructure.

Integrated Territorial Investments (ITI) is a new form of cooperation between local governments co-financed from European Funds. The partnership of Cracow and the surrounding municipalities, as well as the voivodeship authorities, jointly set objectives and identify investments necessary to achieve them. ITI is the basis for the functioning of the Cracow Functional Area in terms of eliminating barriers to the development of municipalities that are part of it. In order to organize the structure of cooperation between the administrative units comprising CFA, Cracow Metropolis Association was established in 2014. Its main goal is to tighten cooperation of local governments and maximize the use of their potential.

The total area of CFA is approximately 127,500 ha, of which approximately 26% is occupied by the city of Cracow, and the remaining 74% by the suburban zone. Cracow Functional Area, in comparison with similar areas in Poland is characterized by considerable economic strength. The driving force behind the area's economic potential is Cracow - an attractive center in terms of economy, tourism, and scientific opportunities. The value of GDP per capita in the Cracow Metropolitan Area in 2018 was around PLN 71 thousand. In recent years, an increase in the economic activity of entities in the CFA per 10 thousand inhabitants has also been observed. In 2016-2018, the median of this indicator increased from the level of 1,201 to 1,279. Observing the investment activity, CFA is an area that also stands out in the national scale. In 2016, the amount of foreign investment and greenfield investment in the area of Cracow, Cracow and Wieliczka districts reached just under 1 billion PLN.

Along with the economic development in Poland, the situation in the labour market in the Cracow Functional Area has also been changing. In the years 2003-2018, the number of unemployed registered in the area of CFA has decreased from about 42 thousand people to about 16 thousand (the registered unemployment rate has dropped to 1.5-3.1% depending on the municipality). The systematic decrease in unemployment observed for many years concerns both women and men. Considering the division of CFA into individual municipalities, analyzing the period 2016-2018, the largest relative decrease (above 20%) in the number of registered unemployed was recorded in the municipalities: Igołomia-Wawrzeńczyce, Cracow, Liszki, Mogilany, Niepołomice, Skawina, Zabierzów, Zielonki. The average drop in the number of unemployed in the analysed period was 27% for the whole of CFA. The drop in the long-term unemployment rate (the ratio of the long-term unemployed to the total number of the unemployed) is also a positive information for the area. The dynamics of change in this regard in 2016-2018 is presented in the table below:

According to the latest data, the Cracow Metropolis is inhabited by approximately 1.5 million inhabitants, of which a vast majority - the city of Cracow. In CFA itself, with regard to demographic forecasts in the long term, population growth is expected. Between 2016 and 2030, the forecasts of the Local Data Bank assume an increase in population in the CFA area by more than 50,000 inhabitants, which is an increase of 5.2%.

Cracow Functional Area is located in the Małopolskie Voivodeship, which is an important scientific center on the map of Poland. In recent years, a clear upward trend in employment in the area of Research and Development has been observed in this voivodeship.

Number of employees in the Research and Development sector in the Małopolskie Voivodedship [2014-2018]:

One of the important indicators of the level of innovativeness, technology transfer and potential for free flow of intellectual value of given regions is the share of innovative enterprises in the total number of enterprises. Based on the data presented below and information for the whole country, it can be concluded that the average share of innovative enterprises in the total number of enterprises for the Małopolska Voivodeship is higher than for the whole country. In 2017, this indicator for Poland was 14.5%, while for the Małopolska Voivodeship it was at the level of 15.1%. It should be borne in mind that in 2011, 2012, 2015, 2016 and 2017 the indicator was above 15.0%, which indicates a high share of innovative enterprises in the economy of the Małopolskie Voivodeship. According to the data of Regional Development Observatory of The Małopolska Region on patents granted in 2012-2018, 10% of all inventions submitted to the Patent Office of the Republic of Poland came from the Małopolska Region. Entities in Małopolska who worked on innovative solutions submitted 2,972 inventions. When analysing the number of patents granted to entities operating in CFA in the context of the evaluation of the intensity of innovative activity, it should be borne in mind that according to the data from the Patent Office, only about a dozen or so percent of the granted patents are implemented. This is largely due to the fact that in the Polish business reality, the dominant entities in terms of filing patents are universities and not private companies, as is the case in most developed economies. In the case of CFA, the dominant entity in this sphere in 2018 was Jagiellonian University, which submitted 12 applications to the European Patent Office.

In nominal terms, the largest number of people is employed in industries included in the smart specializations in Cracow (almost 90 thousand employees). In 2015-2019, on average, every fifth newly registered business entity in the voivodeship was part of the RSS with its business profile. RSS industries in the subregion of the city of Cracow (27%) and in the subregion of Nowy Targ (20.1%) have the largest share in the total number of newly established companies in the region.

According to the study "Millennium 2020 Index - Innovation Potential of Regions" prepared by Bank Millennium, the latest analysis was not surprising compared to the study conducted in 2019. Małopolskie Voivodeship remains in the trio of provinces that are innovation leaders (next to the Masovian and Dolnośląskie Voivodeships). This is due to the high activity of economic-business and educational centers, which are supported by the visible presence of foreign capital.

It is worth noting that the Małopolska Voivodeship is also the region that, like the Pomeranian and Podkarpackie Voivodeships, came closest to the leader in this ranking - the Masovian Voivodeship. Małopolska owes its position as runner-up in the Millennium 2020 Index primarily to its well-developed innovative services sector - the ratio of R&D expenditures to GDP in the region is at the highest level in the country. The advantages which are the foundation of the innovation potential of Małopolska include a well-developed transport and education infrastructure, a large number of patents and researchers, as well as the share of innovative companies in the total number of companies at a level higher than the national average.

Key industries indicating the fields of specialization of the Cracow Functional Area are included in the Regional Innovation Strategy of the Małopolska Region 2030. These fields include: